How much longer to wait? What to do now? How to live? Everything got mixed up. Everything has changed.
On February 23, as usual, I came home from my workshop around midnight. We sat in the kitchen for quite a long time and talked. Among other things, there were feeble jokes about an “anxious suitcase”, as well as thoughts about what Michel Foucault would say about the present-day situation. As everybody went home, I pulled my backpack from the shelf, put some stuff inside, and lay down to read the news. After hearing the first explosions, I rather anxiously packed up all the things needed and went on reading. Posts about explosions heard in different parts of Kyiv started to appear on Facebook.

As the morning finally came, I went to the city of Bucha to my girlfriend’s parents. We assumed it would be safer there. The bus stop was overcrowded, people were forming endless lines, it was hard to tell where to go. After a while we were riding in a marshrutka (note: small bus used as transportation), standing. It took us four hours to reach our destination. Normally, a route to Bucha would last no more than 30 minutes. Everywhere on the streets, we could see lines to the pharmacies and ATMs. 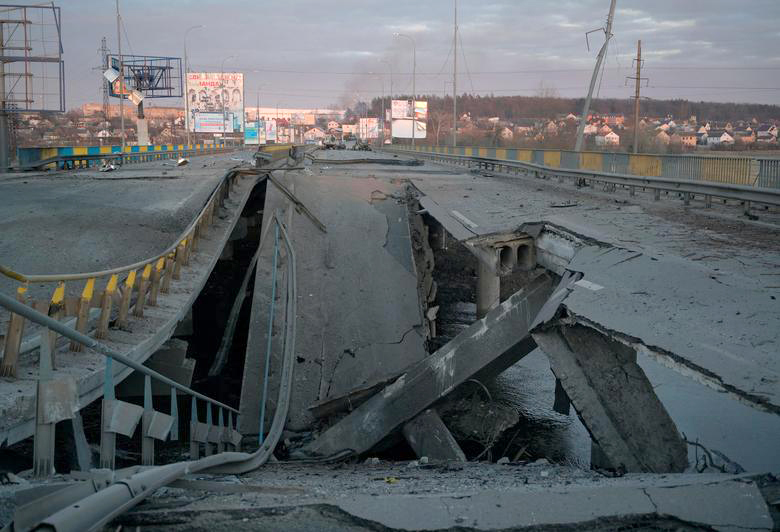 Ruined bridge between Bucha and Kyiv. Photo from Reuters

At home, we had our breakfast, and I went to bed to the accompaniment of the explosions in the nearby city Hostomel. In the afternoon, we took everything we needed and went to the bomb shelter. Yet, we left our cat at home to come back for him the next day. Just in case, we left him a lot of water and food.
There were about 10 children and 40 adults in the shelter. Of all the people there I knew only those three I came with. It was a basement with two furnished rooms and a kitchen. Belongings were lying everywhere: bags, backpacks, blankets, sleeping bags, mats. A TV on the wall was broadcasting news, someone turned up the volume, then turned it down. It was already known that fighting was going on in a Hostomel airport, which was 4 kilometers away, and continuous explosions could be heard even in the shelter. Inside, some people were going about their usual business, others were sitting and talking, and someone was looking at the phone. Children were running, shouting, knocking on the gypsum walls, and these sounds were mingling with the explosions until kids sat down at the table to draw.

A sheet of paper with pictures of children from the shelter. Photo by Yevgen Samborsky

We went outside to smoke and saw a plane on the horizon, a few kilometers away, which threw two red-flame missiles that disappeared behind the buildings. And the plane turned in our direction. We tossed away our cigarettes and rushed inside.
After everyone had their dinner, they started arranging sleeping places. People lay down everywhere: on the sofa, tables, floor, sitting in chairs. We settled ourselves on the narrow wooden benches. Everyone was asked to stay quiet, and the lights were switched off. The night protracted in anxiety from the banging and the dread of tomorrow. Balancing on the bench, we turned from one side to the other to make ourselves comfortable. 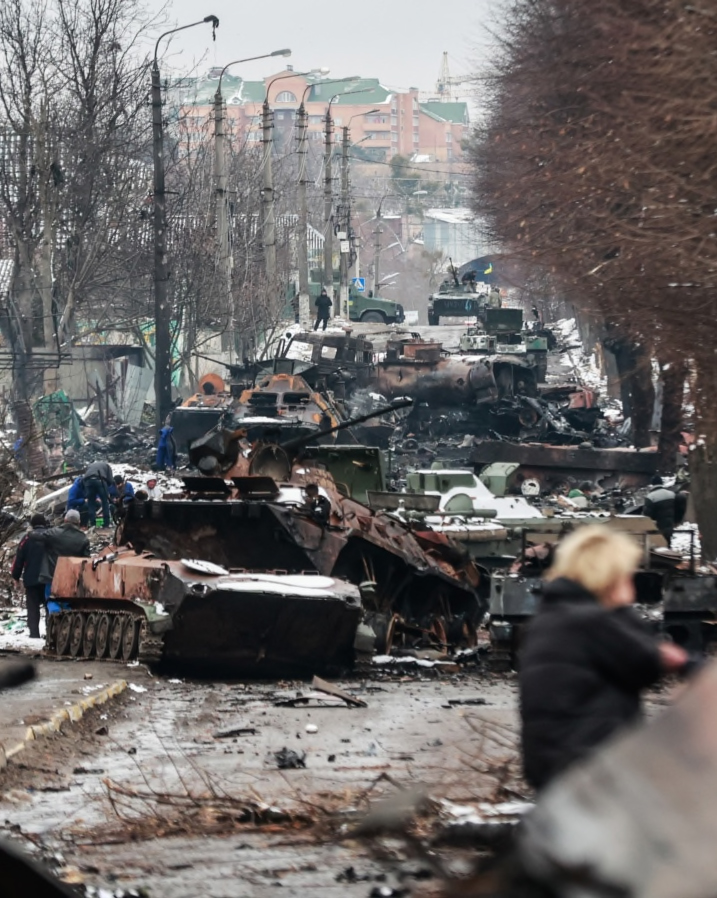 It seems it was around 8 am when the lights went on in the room and a woman said, “Everyone wake up! I got a call, they said that Russian tanks had entered the city. They can be seen from the windows. You have 10 minutes to escape. Those who want may stay. Decide quickly! You have 10 minutes!” Of course, no one had ever woken me up with such words before, so a rather strong sense of fear gripped me. People hurried to grab their things, fold blankets, roll-up mats, dress children. It was a sleepy, yet bearable panic. Everyone quickly began to go outside. I came out fully equipped with my stuff: a backpack and a waist bag, a massive bag in my hands along with my girlfriend’s mat. Ready to help and somewhat confused, I didn’t know what to do. I was thinking which side the troops were coming from, whom to help with packing — or better not get in their way? — and which way to run. At the same time, I was worried that we had no car — would there be a place for us in someone’s car? I visualized tanks on the streets I had walked several times. Something like a collage or a video montage, with vehicles overlapping memorized urban landscapes, caterpillar tread gnawing the pavement.

People were running and stuffing their things in cars. Two loud explosions hit behind the buildings, everyone was startled and started moving faster. We were loudly told to get in cars, so we pushed ourselves inside. There were seven of us in a car, and we couldn’t close the door. When two more explosions came, the driver got going, and we managed to close the door on our way. We had no idea where to head next. The only thing we knew was that we were moving West. For several hours, we drove paralyzed by fear and didn’t talk much. After a while, that fear began to turn into realization that we could have died recently. 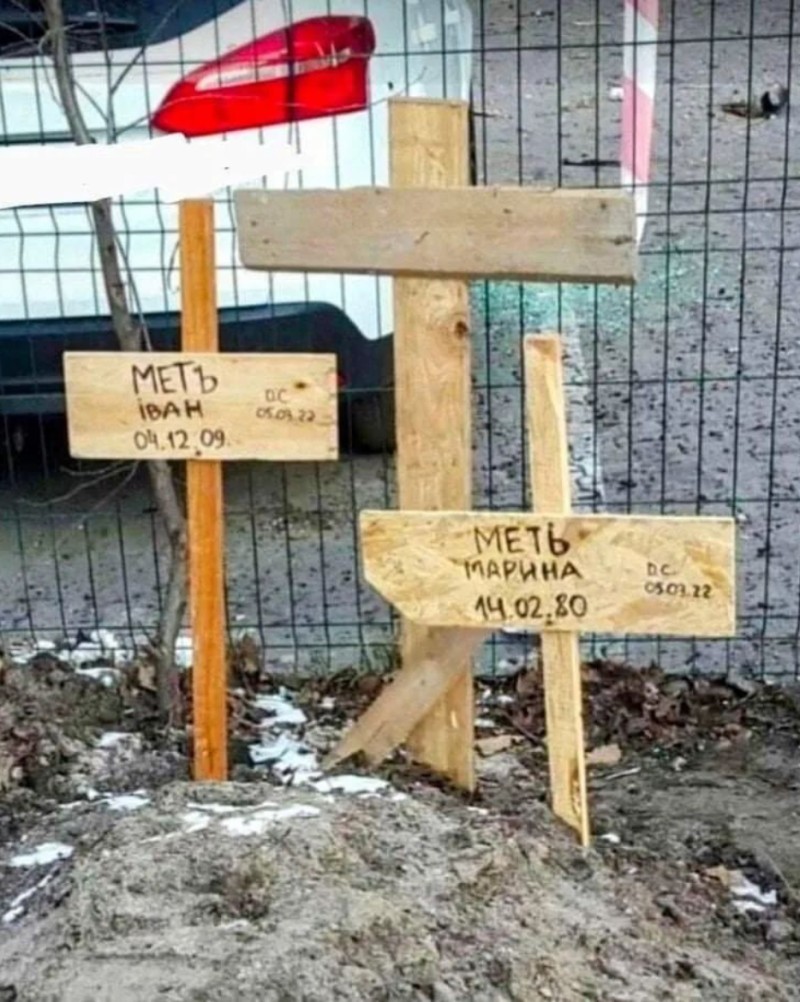 Irpin. Burial in the yard of a residential building. Photo by Sergey Kucherenko

Samborsky Yevgen is a Ukrainian artist. Born in 1984 in Ivano-Frankivsk. Studied at the Art Institute of the Carpathian National University (2005). Received a scholarship from the Polish Ministry of Culture (2009, 2012). Winner of the MUHi Competition (2012), winner of the First PinchukArtCentre Special Prize in the Open Group (2013), winner of the Dymchuk Gallery Open Call for Young Ukrainian Artists (2017), nominee of the PinchukArtCentre Award (2018). Curator of the Residence for Artists in Ivano-Frankivsk (2015) and the International Festival of Contemporary Art Porto Franko (2018). He has been a participant of numerous solo and group exhibitions, projects in Ukraine and abroad (since 2003). Lives and works in Kyiv. At the beginning of the full invasion of Russia in Ukraine moved to Western Ukraine.