My life in peaceful times could hardly be called stable. I used to have quite a short horizon of planning and a lot of spontaneity. Currently, my life became extremely fragmented. After the forced evacuation together with my children, we have been on the constant move from one place to another, from country to country. New tasks and unexpected challenges arise constantly. I have no possibility to concentrate on one thing.
Every day I plan to come back to work and that’s why I constantly make notes of what I would need to write about when I eventually get a chance. I make notes on my phone, on my laptop, in a notebook, in children’s books, often on pieces of paper, but sometimes also on the shop receipts. I write down my thoughts, memories, reminders, topics for reflection. They appear and then I lose them. I try to systematize them, but eventually they all get confused. Today I realized that I also think in such fragmentary notes. I speak so too. My current life reminds me of some isolated fragments. I hope that one day I will put my own mosaic of this together, but for now, here are few fragmented notes on the “unnecessary” heritage.

One of the leading narratives of the Russian war against Ukraine is the revival of the „triumph of the great victory.“ The victory of the USSR in World War II is attributed to Russian soldiers, although the participation of the Ukrainian military was decisive. Even today, while fierce battles against the Russian army continue in the eastern and central Ukraine, Russian propaganda is spreading around the world. WWII memorials are being actively destroyed in western Ukraine, therefore reinforcing Russia’s propaganda that World War II belongs to them alone.

The Day of Monuments.
April 18 marks the International Day of Monuments and Sights. „It aims to raise public awareness of the diversity of cultural heritage, its vulnerability and the need for effective efforts to preserve it for future generations.“ – Wikipedia. On April 18, two young Kyiv deputies of the Kyiv City State Administration registered a draft law on dismantling 60 objects in Ukraine’s capital… It is a pity that in the minds of officials, decolonization should be done with a hammer exclusively.
On the same day, April 18, in occupied Henichesk, Russians glued together a previously dismantled Lenin’s monument and restored it on a pedestal. Guided by magical thinking, they try to influence the present with symbols of the past. Within the very similar paradigm, decisions are being made to destroy Soviet monuments in western Ukraine today. It is noteworthy that Lenin’s monuments were dug up in Henichesk and Kyiv almost simultaneously (In Kyiv they want to dismantle a sculptural image in the interior of the Teatralna metro station, which has been well hidden behind the decorative panels for many years. Only few people can remember now that Lenin is there at all).
In the evening of April 18, I saw some photos from the Kyiv memorial to Soviet tankmen who liberated Kyiv. It was built on the Victory Avenue, near Shulyavka metro station, based on the sketches of the prominent Ukrainian architect Eduard Bilsky. The memorial consists of a T-34 tank on a pedestal and a decorative stelae dedicated to the hero cities (this status was dedicated to the 12 Soviet cities after World War II). On April 18, activists replaced Russian and Belarus cities with Ukrainian ones on these stelae. That’s how Mariupol, Bucha, Volnovakha appeared there. Some of them are supplemented by the photographs of atrocities conducted by Russian soldiers in these cities. While Ukrainian officials demolish and occupying ones recreate Soviet monuments, unknown activists demonstrate how to use one skillful gesture to condemn Russia’s crimes, cross out their pathetic glorification, and memorialize the tragic events of modern warfare. 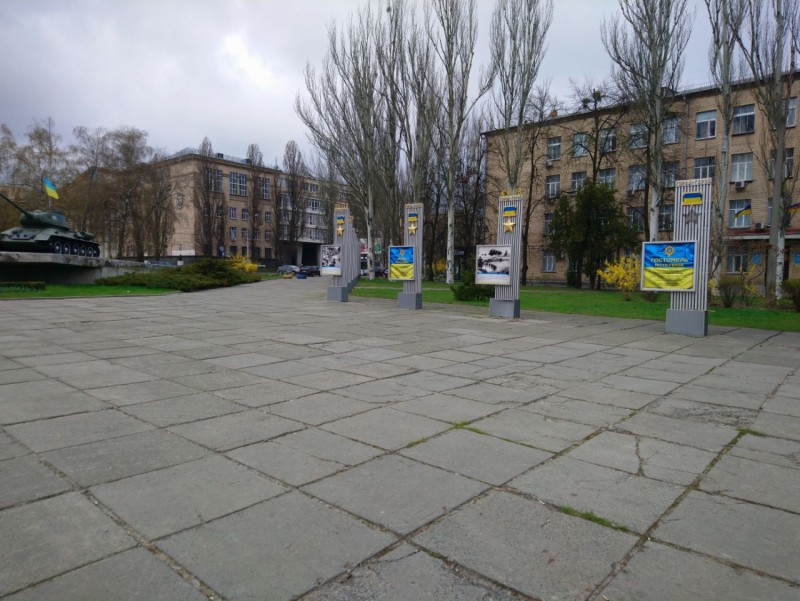 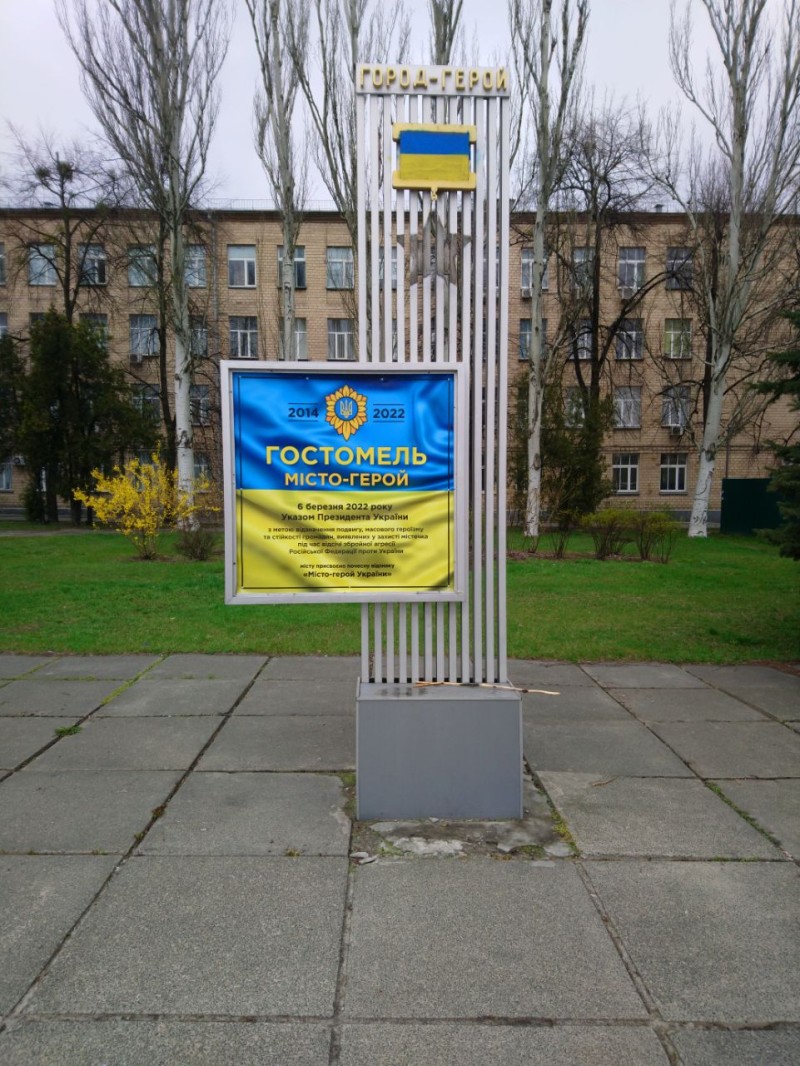 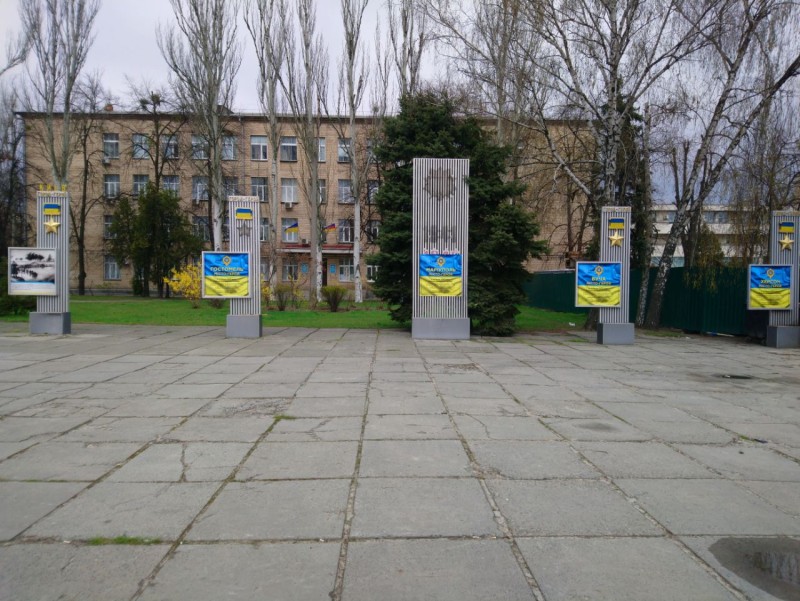 The DE NE DE initiative has a project called ERO_HEROES – https://www.instagram.com/ero_heroes/ – an Instagram page where we publish photos of Ukrainian monuments to the soldiers of World War II. The images are very detailed, fragmented, often with unexpected angles and precise focus on the formal features of the sculptures. When one looks through the layers of heroic pathos, the figurative and plastic language of objects reveals itself, showing the essence of monumental propaganda. Now, in light of war, these monuments are gaining new importance. A monument to a Soviet soldier of WWII, recently mutilated by a bomb, which Russians aimed at a residential area of ​​the Kyiv suburbs, convincingly demonstrates the tragedy of the Russian war against Ukraine. 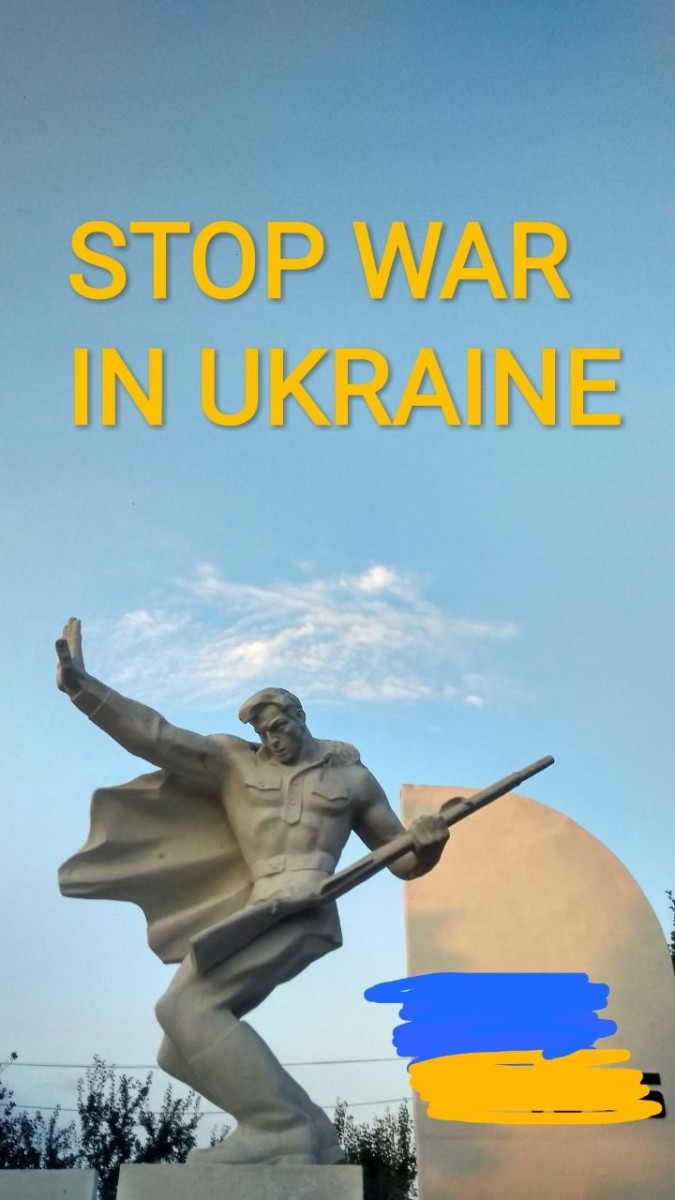 Even more ostentatious in the context of rethinking of the Soviet heritage is the story of “Vasylkiv Rooster” which was created by the Protoriev family. This decorative ceramic kitchenware was mass-produced in the 1960s at the Vasylkiv Majolica Factory. Until recently, these roosters could often be seen at the flea markets or online auctions for a price of 100-150 UAH (note: 4-5 Euro). Sometimes they could even be found at the trash bins. The rooster had very few admirers as it was considered a „Soviet stamp“ which minimized its cultural value, but only until the day when it was depicted in a photo from the destroyed house in Borodyanka – there was only a kitchen cupboard hanging on the wall with the rooster on it. This photo went viral with the following caption:

Roosters became even more popular after the artist Lera Polyanskova presented them to Volodymyr Zelensky and Borys Johnson during their meeting in Kyiv.
Now, no one is talking about the “sovkovist” (mean.: soviet heritage with a negative connotation) and mass production of the rooster. Its value at auctions is constantly growing, and the new symbolic cultural value becomes obvious. Recently, the same rooster from Borodyanka along with the cupboard were transported to the Museum of the Revolution of Dignity.

The participants of the project CO-HATY clearly demonstrated how to use the heritage of the Soviet past to create something new. Launched by the association of initiatives MetaLab + urban curators + Children’s School of Architecture, the project aims to create temporary housing for displaced persons. For example, a non-functioning dormitory of the Soviet period was operatively converted into functional housing. The „gray dull “sovok” (mean.: soviet heritage with a negative connotation)“ that seemed to ruin Ukrainian cities became a lifeline for many people during the war. 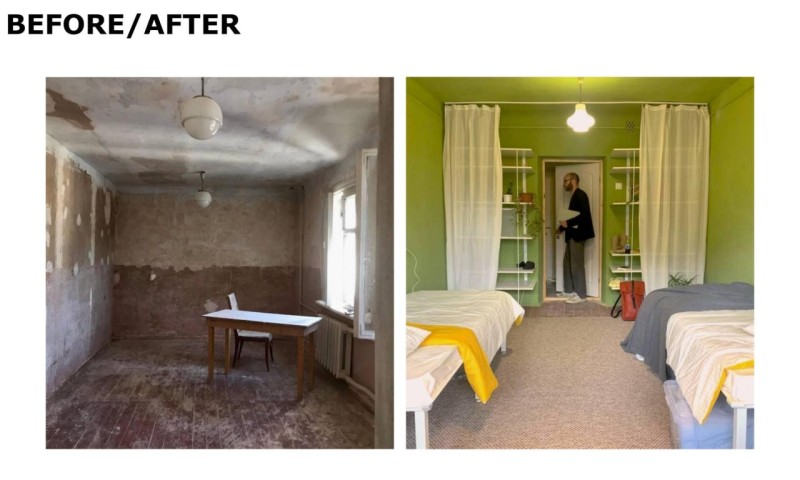 Lev Shevchenko, the author of a blog about Ukrainian Soviet housing architecture – https://www.instagram.com/panelky.ukraine – reflects about the change in attitudes: “Rotten nine storey buildings? Ugly Khrushchyovkas? It doesn’t matter. They are all someone’s home. You can feel it very well when there is no wall in the house. We admired European architecture, until it turned out that chaotically built Irpin and Bucha are the best place in the world.”

Yevheniia Moliar studied art history and theory at the National Academy of Fine Arts and Architecture in Kyiv. She is a participant in the self-organized art initiative DE NE DE and the intermuseum project „Museum is open for renovation“. She researches cultural heritage of the Soviet period and contemporary art that has such heritage in its focus.