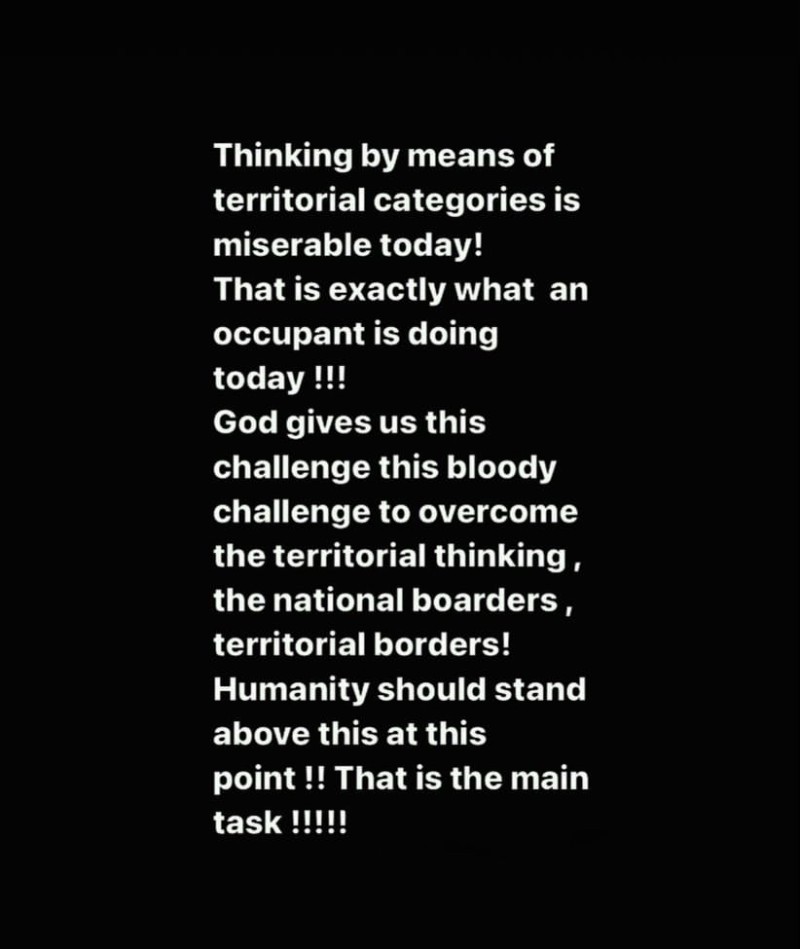 I woke up at 5 am in Kyiv because I heard an explosion. I got up immediately, took a quick shower, prepared cash and documents, and laid back in my bed hoping it was a noise coming from the dream I was seeing. Then shortly I heard another explosion and another. Maybe 4 in a row. I made a post on Instagram. Many of my friends responded immediately saying they heard it too: in Kyiv, Odessa, Kharkiv almost simultaneously.

I left all my things, all the works I made throughout the last 1.5-2 years in Kyiv in the apartment. I closed the apartment and left not knowing where, and when I would get there next time. I remember spending the next 16 hours or so underground in a vintage store on the next street with a beautiful crowd of beautiful people, children and pets. Owners were preparing tea and coffee food all the people of all ages. We were mostly silent, reading the news and sharing the most important ones from time to time. It felt like we knew each other all along although there were none of my closest friends around. I made a quick note there: „Imagine a feeling of total carelessness and total alertness at the same time. Two emotions I experience at the moment are fear and love. Only two. No hunger, no tiredness. Just fear and love. And shock of course. Also, I lost a feeling of time and space. Completely! It feels like I just woke up like I just heard the explosions, yet it’s 4:38 pm already now. Fear and love: contrasting feelings just like those two cats (one of them is black another one is white) of people sitting underground with me“.

Around 10 pm my closest friend called me and told me immediately to come to their apartment (her and her husband’s). I couldn’t move, I was afraid of walking out. They called a cab for me and brought me to the Podil. The streets were empty. I was afraid of every small noise. Kyiv was especially giant and cold at that moment. Kyiv is gorgeous, and the gorgeousness I was observing from the cab’s window made me shake and tremble even more.

We spent the night underground in the subway. In the morning we got back to their apartment to have some food. I couldn’t eat. I had a breakdown, I closed my eyes and I had a vision. Then my other friends picked me up on the way out of the city, I needed to get to my grandmother ASAP who was all alone in the countryside.

On my way I luckily made a quick note where I described the vision I saw: „I just had a breakdown. Luckily, I was around my dearest ones in the apartment where my Kyiv life literally began 1.5-2 years ago. While trembling I closed my eyes and saw a blue horse contoured with golden shining. It was running above the Dnipro river. This horse was more like a spirit. Great Spirit, Large Spirit. It was moving in slow motion hitting the water with its hooves. I saw a spirit of Kyiv, of Ukraine, of our Land. This spirit is immortal!“

I was afraid of staying in Ukraine, I was afraid of leaving. I know neither is right, neither is safe. I decided to stay. I just asked my grandma „Would we escape?“,  she responded „There is nothing to escape. We are on our Land.“

I left all of the materials in the apartment in Kyiv. I locked the door and head the bomb shelter after I heard the first explosions, in 1 day I left the city. Now here in the countryside, I’m basically out of materials I thought. I used to sketch a while ago on the rolls of wallpaper leftovers. I recalled that option: I found some crayons of my younger brother who left them while visiting in summer. So I made two drawings for the first time since the war started (on the tenth day). De Libertate is the name of a poem by a Ukrainian philosopher and writer from the 18th century – Hryhoriy SKOVORODA

The second drawing is of me and my grandmother (who I am with atm, it’s two of us)

I imagine us being protected by a sphere/circle we are in. There is no calmness now; it’s consistent alertness. We’re protected by higher powers but also we have to be always alert.

The following two drawings (pink ladies) I made with gouache I found later and charcoal. These ladies are fighting the enemy: fear. I painted their bodies with beet leftovers, my grandmother was peeling boiled beet while I was drawing, and we were sharing the table

They remind me more of posters. The first one is a concern about the immediate need for the sky to be closed. Mother with a child is begging unknown authorities/people sitting above to close the sky. The authoritarians show their hands doing nothing while the enemy is on the right getting closer by both land and sky. “Open” is written in red just like blood, maybe it is blood. The second one is a very positive drawing I made.  I got inspired by a civilian from Kherson who jumped on a Russian tank with a Ukrainian flag. People from Kherson are very brave: they defended their city all by themselves. You can read “fuck you/go fuck yourself” in Russian/ Ukrainian written on the tank (Cyrillic). And a third drawing is on the fragility of the shelter people try to hide in. There is nowhere to run away for many often, unfortunately. Yet for the majority of Ukrainians faith is the most protective and only kind of shelter.

I still wonder if I should leave or stay. Neither is right or wrong. I made many drawings and paintings in the recent past that reflect the present so precisely. I would like to share some particular ones:

Sana Shahmuradova was born in Odesa, Ukraine in 1996. Major part of her childhood was spent in the countryside in Podillia region, Ukraine among rivers and forests. In 2010 she graduated from Ballet school. In 2014 she relocated to Toronto as an immigrant. Sana received her Bachelor of Arts in Psychology at York University, Toronto, ON in 2020, and finally made a decision to relocate to the city that’s been inspiring her all along – Kyiv. As a visual artist she is mostly working with graphics and painting, searching for the barely explored roots of her ancestry through both collective and personal archetypes.