Oleksandr Halishchuk: We Are Dancing – Not Cops & Graphic War Diary

We Are Dancing – Not Cops

“We are dancing – not cops” is a dance of victory. I won, because I have nothing to lose, because my nothing is governmental everything. In reality, I am just “another one”, a repeater in the information space. In the impossibility to scream, I create a noise of all spectrums and colors. Being a living queer means to commit an act of terrorism every day. Being public/sincere means raping people. Being myself means stabbing others. I exist in a clusterfuck and I am the clusterfuck by accepting this statement I act. Broken, tired, angry, I rush into the hectic dance with a hysterical laugh because of all the homonationalism, neo-nazism, cops and government. I am going to show up on screens and loom in front of the eyes until puking and cursing, because whatever happens has already happened.  I am scared, as a lot of people and still I am coming concentrated and goalless. Why shouldn’t I do everything if I lose nothing anyways?”
– Oleksandr Halishchuk, Fall 2021 CW: Police violence 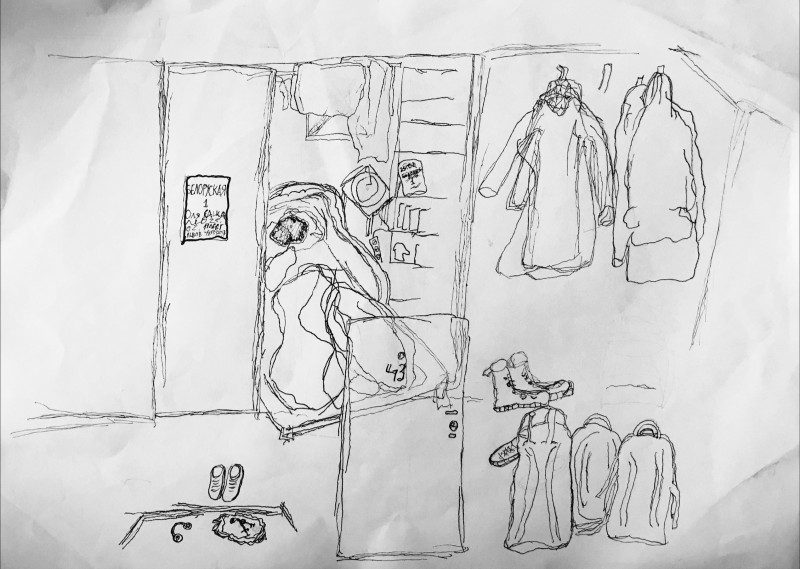 Apartment of Olya Yeriemieieva, Oleksandr Chepieiev and Zhenya Kriuk. The place of art (and not only) gatherings. It became our place for the last night in Kyiv and the station of escape. 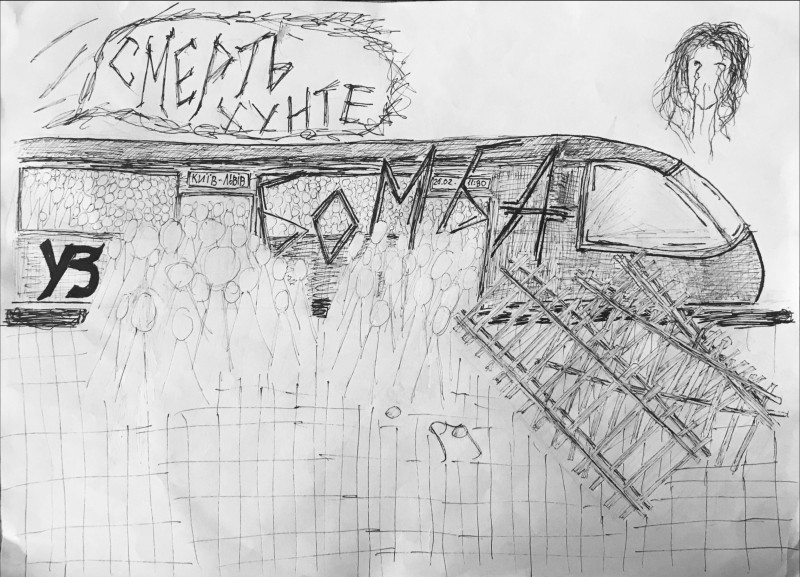 Departure. Olya Yeriemieieva, Leo Trotzenko and I, while trying to squeeze in the evacuation train Kyiv-Lviv on February 25 at 11:30 a.m., got under the terrorist attack. I lost the lens in my glasses, Olya broke down. 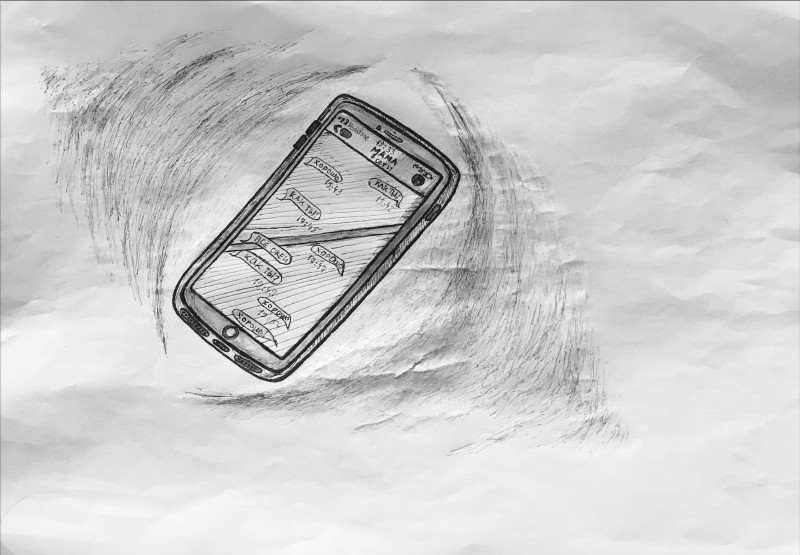 „How are you?“ – „I am fine, and you?“ – text conversation with my mom, who stayed in the occupied Melitopol. 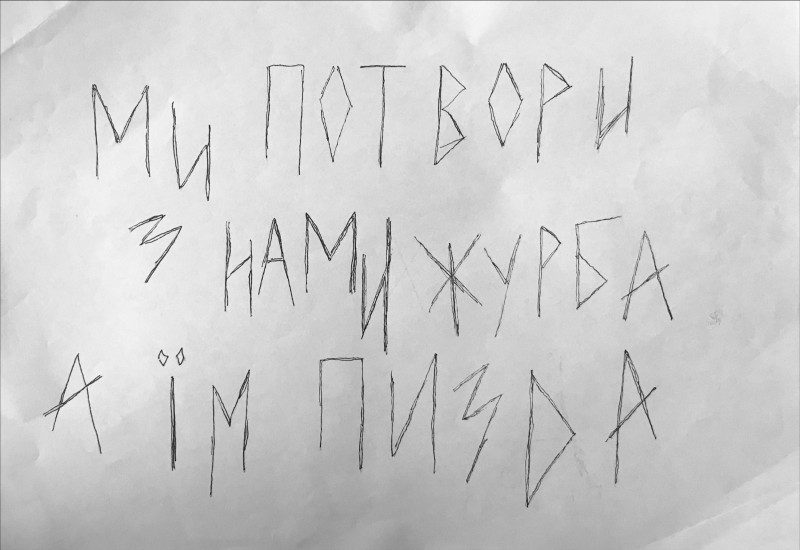 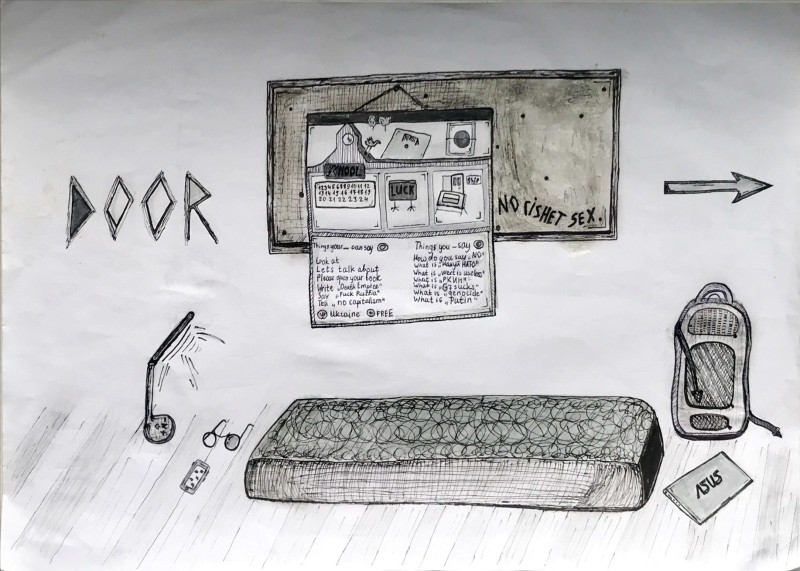 Squat in a foreign language school.

Oleksandr Halishchuk (he/they) is a multimedia artist, born in 1999 in Melitopol, Ukraine. In their work, Oleksandr uses graphics, video, sound, text, installation and painting, reflecting on the topics of trauma, abuse, marginality, truth and identity.

The presentation of two different works – a music video and a graphic war archive – created by Oleksandr Halishchuk, Ukrainian multimedia queer artist, is a curatorial decision to portray the multidimensional fight for freedom in Ukraine.

The video work “We Are Dancing – Not Cops” by Oleksandr Halishchuk was created in fall 2021. The artist dressed in fancy and funny (trashy) costumes performs entertaining, soft and floating movements. The work is a remake on Charli XCX music video “claws”, based on the memes circulating around it. Oleksandr created new layers to it, stating: “The violence and protests are there; the war and fights are here and I am in both and each”. The subject matter of “We are Dancing – Not Cops” is the fight of an individual existence and communities, particularly marginalized, against the oppressions of police apparatus, patriarchy, heteronormativity, right-wing politics and other unjust and oppressive social and political systems. This work manifests the fight for freedom by existing as an authentic self, in spite of anything. People in Ukraine have been carrying out this fight for the past decades. Since the Revolution of Dignity in 2014, that in many ways was also the liberation fight, the LGBTQ+ and feminist movements as well as techno culture have been rapidly evolving. At the same time, people from these communities usually became victims of the right-wing attacks or police violence. In May 2021, a series of police raids took place in the clubs located in the cultural center of Kyiv – Podil. Many of the club visitors were illegally searched, some suffered from the police violence. These events provoked mass protests in front of the police office in Podil, where people united in solidarity and stood together against police brutality in Ukraine. This fight for liberation was always there.

In February 24, 2022, Russia announced a full-scale military invasion of Ukraine causing enormous suffering of millions of people: displacement, death, tortures, violence, destroyed housing and infrastructure. During these events, Oleksandr Halishchuk kept their graphic diary, documenting experience of displacement, chats with their mom living in occupation, political statements, thoughts and emotions provoked by the war. Since February 24, people in Ukraine have united in the fight against the turbocapitalist authoritarian military Russian empire. For many people in Ukraine now fighting against Russia means fighting against imperialism, authoritarian and military state, oppression, right-wing politics, police brutality. It means fighting for freedom. The theme of struggle for liberation of Ukraine unites both works of Olexandr Halishchuk. Ukraine free from oppressive political and social systems has always been a dream of many.