I left Luhansk in 2014. The refugee status is not new for me. Now, for the tenth day of the Russian invasion I feel like I’m stuck in the evil loop. My first thought on the 24th Feb in the morning was that I’ve already survived it once, so I must know what to do. But now, let me remind you, it’s the tenth day of war and everything is completely different. 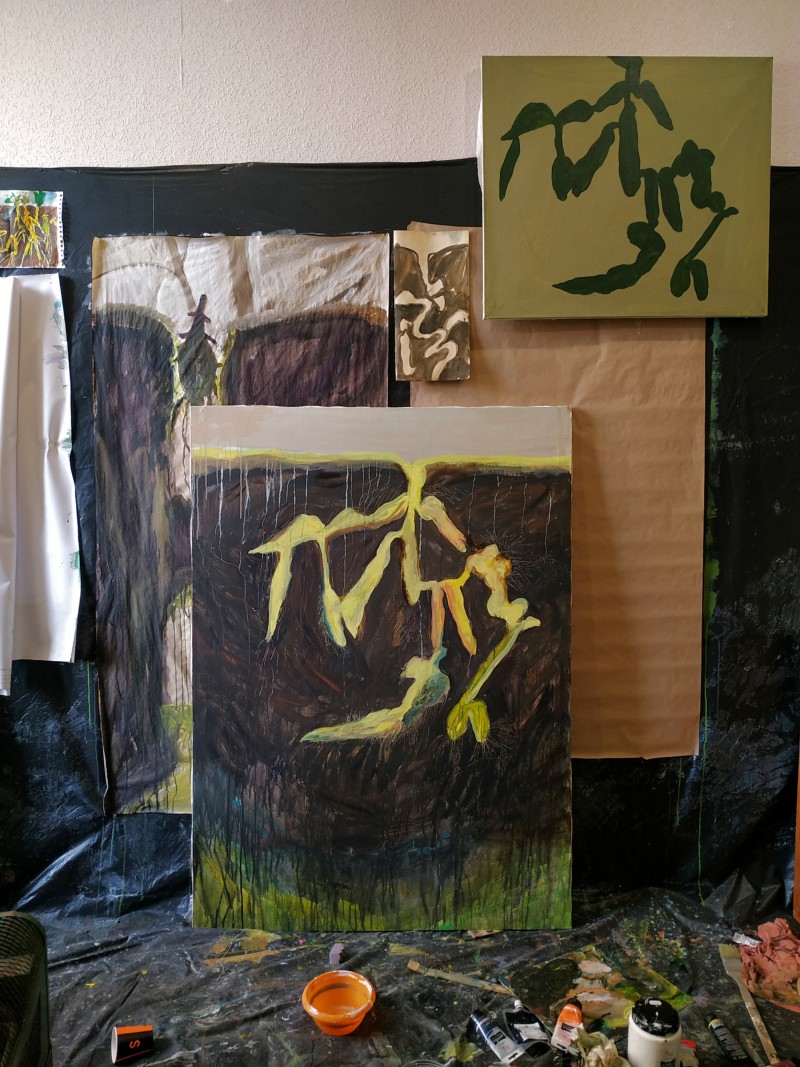 PART 1
When I think about the beginning of the war, which started in Donbass 8 years ago, the first thing that comes to my mind is gardening and vegetables. I was 15 years old and all the days me and my family spent tying tomatoes, watering cucumbers and uprooting weeds, while our nights were spent in the cellar between shelves with potatoes and pickles. I can’t remember when else we worked so hard in the garden like during that intensive bombing of Luhansk. If during previous wars happened on our lands, gardening was a question of survival, but now, when there never was a lack of food, why did we risk our lives so much?
The cellar, which served us as a bomb shelter, was also a place to relax after hard physical work and most of the time we read aloud to each other misadventures of Count of Montecristo. Granddad  repeated all the time that true adventures are always VERY uncomfortable. So, our true adventure ended when bomb hit the house in the nearest neigbourhood and my mom packed some stuff, took me and my 6 year old sister and we left to the western part of Ukraine, almoust by the last train from Luhansk before railway connection was totally closed. 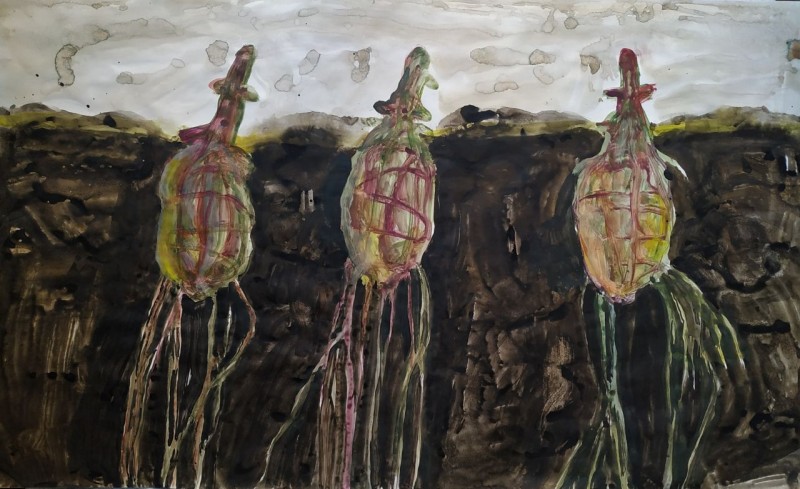 In my painting series about all these events, which I started three months before full Russian invasion, I thought about weak gestures of resistance from people left in Donbass, such as diligent work on private pieces of land in the occupied territories, which are meant to be the last areas where the local population still has some “control”. How “effective” in general can be something not effective at all? These days, when I dream about Donbass returning to the Ukrainian territories, I think about all those uncontrolled processes of growth, wilting, decomposition, healing or horrible metamorphoses that happened there for the past 8 years.
The metaphors of growth, transformation and mutation are key to me, because the longer I stay far from home, the less I know what is really going on there.
I don’t really know how the visible and invisible consequences of war are being changed and are changing everything around. The constant feeling that something is happening there all the time, slow and secret-is completely invisible to our eye, exactly like roots in the garden. 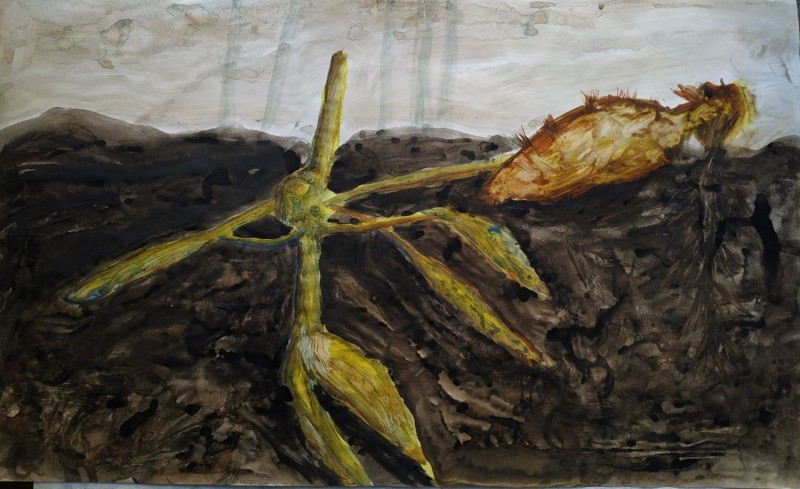 PART 2
I’ve been living and working in Kyiv since 2016. By pure accident, I decided to take up the subject of the war(mostly its consequences) this September. I thought that enough time had passed and I had sufficiently distanced myself from the 2014 events, grew up, took a clear political position and acquired subjectivity by making art. Little bit ironic, but my studio, where all these inner processes in me took place, became the place of real underground resistance. In the huge bomb shelter, three floors below my studio, for the five days my friends, my partner and I were making Molotov coctails, bying food for the nearest hospital and other stuff.
This time everything is completely different. No doubt that again it’s that „TRUE adventure“, but now all decisions are made by me, I choose the information to absorb and believe, stay or leave and so on. Again I think about soil and all invisible processes because we move and act underground, unseen. It reminds me of the systems of tunnels and traps of the Vietnamese partisans, who sabotaged the enemy from under the soil.

Previously, one of my main points in that project was the loss of subjectivity that turned the people of the occupied territories (and us, who moved to Ukraine) into passive participants and observers of events. Because of the feeling of helplessness, I thought a lot about scenarios in which the role of human is secondary, while nature and non-human beings can influence the course of events and maybe, even lead to a happy ending. Maybe, the plants I painted had previously unknown properties and could return voice, heal political blindness or even cure insensibility. I don’t need those properties anymore. I see that these 10 days almost destroyed the original sense of work and totally transformed my experience of a passive observer. Incredible strength, connection, involvement and solidarity of Ukrainian cultural workers and all fellow citizens in general are much stronger than any root system. 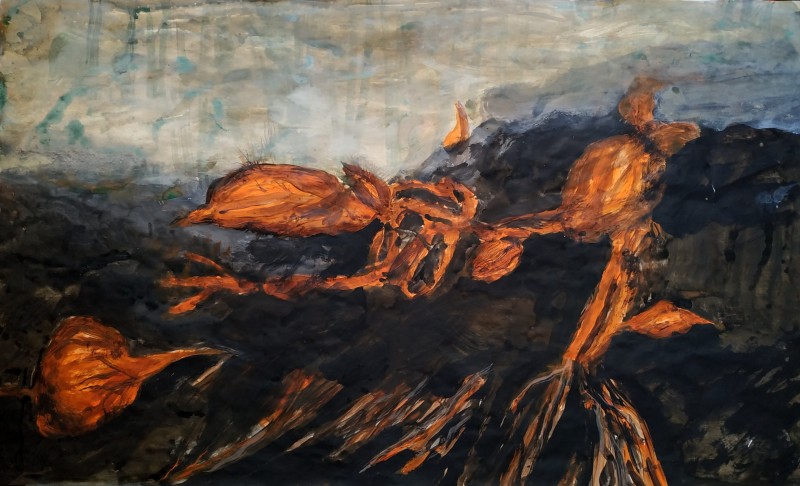 Now I don’t wait for solutions from nature or my family. On the fifth day I packed some stuff, took my mom and my 14 years old sister and we left again to the western part of Ukraine. Here I am involved in a residency, where I don’t feel helpless while I can do my usual work, which is art. I can’t now continue my project or scale it, I need to start from what is left and build it step by step. If before I had fantasie as an instrument for creating order in places where I have no power, now few more things are added and everything and everyone will never be the same.
I will stay and work in Ukraine as long as possible.

Kateryna Aliinyk is an artist, who’s main mediums are painting and text. Currently works with themes of Donbass and war in particular through images of nature and non-anthropocentric optic. Comes originally from Luhansk, lives and works in Kyiv since 2016.