Fractions / Make Yourself at Home

The sequence of events was quick
March 12th afternoon – at Residenz in der Spinnerei in Leipzig – We are standing next to kitchenette, discussing with Lina and Rabih [1] and our hosts Thomas and Ulrike we are discussing the final week of rehearsals. There are some doubts we might not be able to finish it as we planned, but nothing is certain.
March 12th late evening – at theatre guest apartment at Roßplatz – Thomas writes that all activities including rehearsals are being stopped. We plan to stay in Leipzig over the upcoming weekend to calm down after an intense week and prepare our return.
March 13th noon – we all meet for lunch. It’s partly a farewell, partly a moment to discuss a possible new schedule of work. Rabih and Lina are going back Berlin the same day. The goodbye moment feels awkward as we don’t dare to hug each other anymore. On the way back to our apartment we do shopping for weekend.
March 13th evening – Marta is on the phone with her mother, when Polish media announce the borders will be closed within next 36 hrs. Thomas texts us with an invitation to stay in theatre apartment as long as we need. With a bit of hesitation we decide to come back to Poland. No way to reach Lufthansa office, so we buy tickets for the train that leaves Leipzig in 7 hours.
March 14th 6am – with 3 suitcases, 2 bags, 1 backpack and 4 tote bags we’re boarding empty train to Berlin, then we’re changing to even more empty train to Warsaw. Grzegorz is taking picture of Ostbahnhof sign through the window, not knowing why.
March 14th around noon – border station – two bio-hazard-suits man are measuring temperature of each passenger. The tool is not working when trying to measure Marta. They shrug their shoulder and go away. We are given the questionnaire collecting data about our location in Warsaw, but there is nobody to give the questionnaire back to.
March 14th late afternoon – with 3 suitcases, 2 bags, backpack and 4 tote bags we are standing in the middle of our Warsaw apartment. 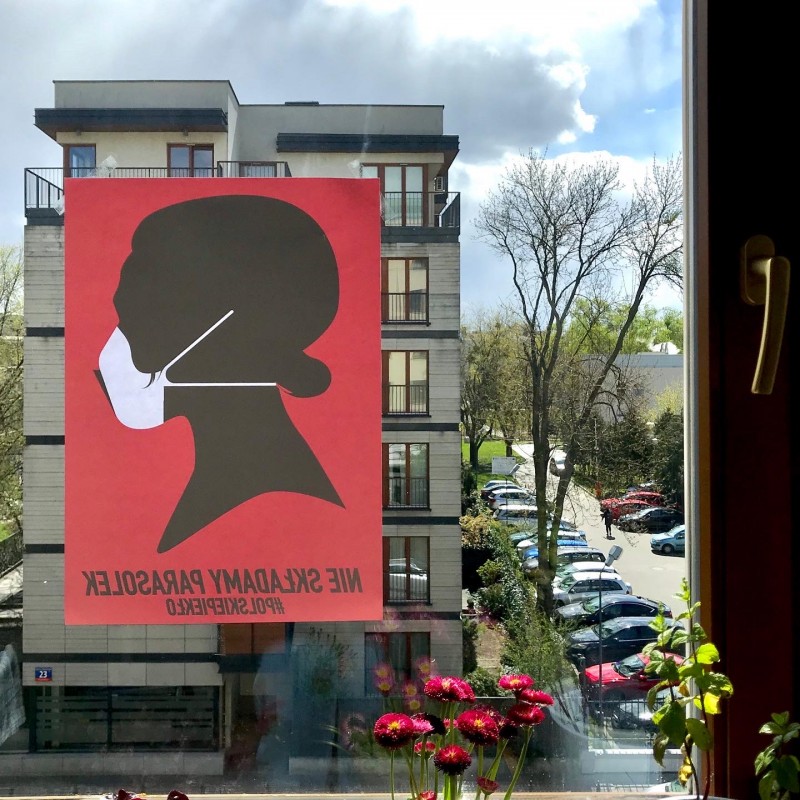 Home making
On May 18th – as we write – it is 65 days in a row we spend with each other and under the same address. Grzegorz has never spent 2 months in a row under the same address, since he started working in the field, sixteen years ago.
We do not feel slowing down though. We are in constant touch with the artists we have been working with before the pandemic outbreak, to see how they can continue their work despite the new circumstances, and to make sure they will be paid as agreed, despite the new circumstances. We are working to secure and deliver our own projects despite the new circumstances, and to see whether this work can be paid, despite the new circumstances.
We read a bit more of not-work-related books and watch a bit more of not-work-related movies. We do not plan this year holidays, and we do not plan next year projects.
Marta is planting herbs and flowers, which she never did, and Grzegorz is cooking a lot which he never (ever) did. We drink more than before, but Grzegorz smokes much less.
We are cursing Zoom and Skype working meetings but at the same time we are meeting friends on that same Zoom and Skype. We are still hanging out more with remote friends than with the neighbors next door.
Sometimes Grzegorz thinks his job does not exist anymore, and often Marta things that is all has to be arranged differently. Despite all its grim sides and the constant emotional rollercoaster, we still try to think of the current situation as a crack in the flow which might open to the new ways of thinking and working.
We try to understand what this current experience means, but still cannot fully grasp it. 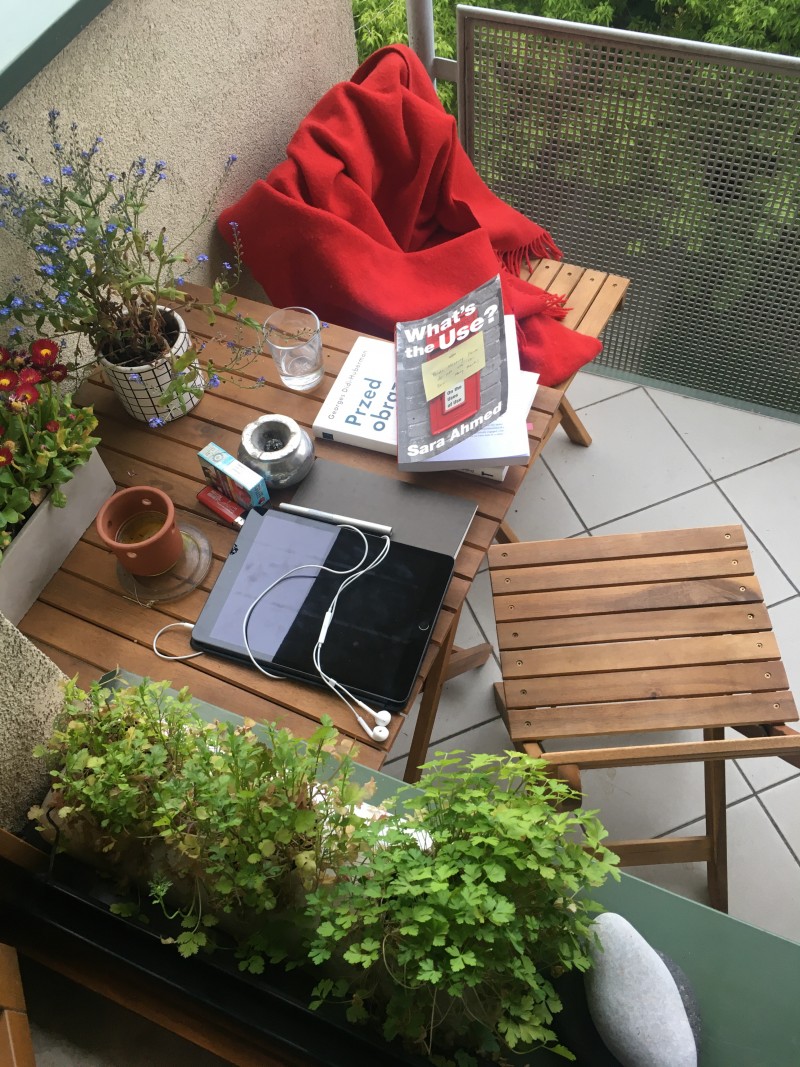 Common Ground
The lockdown happened in the moment when we were shaping the “Common Ground” season at Komuna Warszawa [2]. Thus we need not only about find new ways to produce it, but also redefine what this title actually means at the moment, when “common ground is that very space that has shrunk radically in March 2020. The public space has become something related with a danger, and social contacts have been linked with the risk of infection. The Covid-19 pandemic highlighted borders that – for some of us, who were privileged enough not to bother – used to be invisible: such as (re-)materialized borders of countries, playgrounds, forests, public transport or our own staircases; painfully changing the accessibility of common spaces. On top of that, it also strongly marked privilege and exclusion – related to, for example, who is locked in the frames of their apartment for the very first time and who has experienced that as a reality since years already, who has free access to a computer screen and who has not. What has become freely accessible and common is the fear about the future.”
Funnily enough, this sudden (re-)materialisation of borders happened also exactly in a moment, when we are starting „Moving Borders”[3]. This project, shaped almost two years ago as an artistic mapping of material and immaterial limes, borders, divisions and fractions in urban and social textures, suddenly got completely new dimensions. New dimensions apply also to the way of collaboration – instead of partners gathering at Hellerau in Dresden, we all meet on Zoom.
We are surprised how much there is to learn about complexity and personal impact of translating live gatherings into online connections.
We are are not surprised by discovering Žižek managed to write (and publish!) a book about it already.
We fear about our beloved ones, friends and colleagues in the countries where the outbreak is overwhelming and the freedom of civil rights is temporarily suspended.
Among enjoying watering our plants and mourning the plans we had to give up, there is a big rage against the government which is busy with preparing the fantom elections and introducing an abortion ban again instead of dealing with the current crisis.
We feel rage that we still need to protest this shit.
“The borders had to be closed in order to protect our country and our nation against the virus, the virus that comes from outside“, we hear. To what extend the current state isolation is set on the basis of care and how much as a result of xenophoby and nationalism?
We fear about the next weeks and months.
We feel privileged because we can stay at home and we’re thinking a lot about those who cannot make this choice.
There’s a big wave of online performances, debates, seminars, performances coming every day – as if the art institutions can’t stand and can’t afford the silence. We are wondering if this is more about finding the way to stay in touch with audience and artists or more about staying visible.
We’re mourning the relationships that have been cut off for a while, trying to reestablish them by common routines that can be exercised by the ones who are physically isolated.
We’re feeling hope there will be no return to normal.
This hope is being shattered the following weeks when all the deadlines actualise and come back to haunt again.
Marta is finishing her dissertation on practices of instituting in the performing arts field and we are wondering what will be there to institute within next months and years. What kind of institutions do we actually need? Will we all be able to stop our hyperactivity, which gives an illusion of taking a political stand just by grasping a new topic, problem or inquiry and sell it as a new, sexy program? How to take care of one’s own place, one’s own context and not loose the connection with what is beyond its borders? 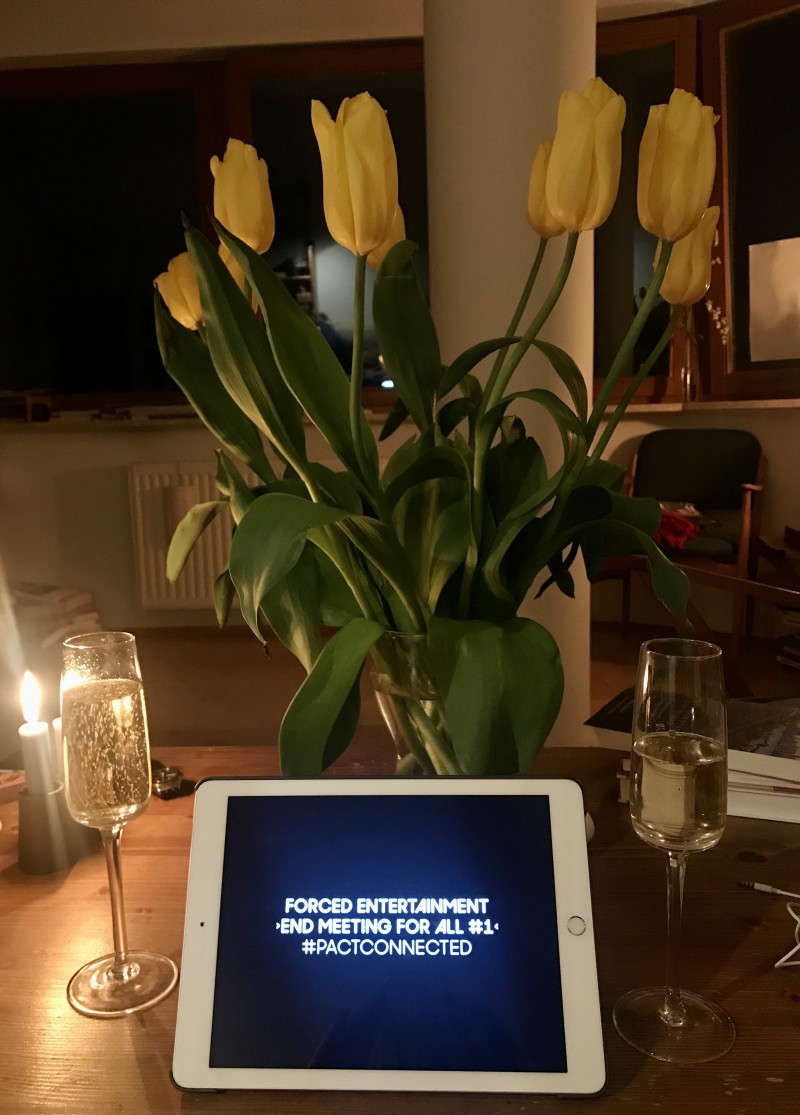 Reaching out
We were criticizing hypermobile flow of artistic, curatorial and research practices to be exhausting both for humans and other-than-humans, wasting the natural and emotional resources, accelerating the process of precarisation and weakening our political agency – and still were taking part in it. It feels liberating not to be obliged to run after the flow for a moment, since the flow has been cut. How can we make sure that xenophobic and nationalist shouts we are hearing around, will not take over our localities? How can we make sure that fleeing from the dead-end way of globalized art market, we will not lose diversity of artistic practices and perspectives? This question feels even more crucial nowadays, when staying at home and caring for our closest community might tend to narrow the view on alternative contexts, histories and inquiries. Thus we feel a strong need to find a way to be together and work together otherwise. We need institutions as assemblies, that will shelter the diversity of perspectives – both these present around, as well as those coming from far. We need to redefine the basic rules of international art circulation, stop being visitors and learn to be guests; stop being presenters and learn to be hosts.

Marta Keil and Grzegorz Reske work as tandem ResKeil since 2018 and are based in Warsaw, Poland. They have been collaborating with each other since 2012, when they took over curation of Konfrontacje Festival in Lublin (2013-2017). They work in the field of contemporary performing arts as curators, dramaturgs, producers and writers. At the moment they curate 2020 season of CultureHUB of Komuna/Warszawa (together with Tim Etchells). They are curators and dramaturgs of „Last but not Last (Sunny Sunday)” – new creation by Lina Majdalanie and Rabih Mroué. Production currently suspended due to COVID-19 lockdown. They are part of Performing Arts Institute collective.

[1] „Last but not last (Sunny Sunday)” by Lina Majdalanie and Rabih Mroue – coproduction of Hellerau – European Center for Art, Residenz in Schauspiehaus Leipzig and Performing Arts Institute. Premiere was originally planned for March 20th, the new date is not decided yet.