At night, I am on the third train commuting from Kyiv to the western Ukraine. My girlfriend and I bought the tickets at around 6 am right after we heard explosions from the shelling in the distance and read all the news about the Russian invasion on social media. I immediately shared the news on my facebook and instagram. I called my mother and sister, and warned my friends, and colleagues about the situation. We packed hastily, things were prepared in advance – an “anxiety suitcase”, poured water in the bathtub, had a fast breakfast, washed the dishes, while monitoring the news online.

The train was at 3 pm, so we went out to check the shelter in the building. We cashed some money and observed long queues at the ATMs and grocery stores. People were tense and anxious, but no panic present. The cars were driving reasonably faster than usual. We took our stuff at 1 pm and went to take the tube for the railway station. There were a few people in the street, some of them glanced at us with suspicion and strangeness. The railway station looked quite usual as to the number of people and their condition, and the first train we took had lots of empty seats.

When I wake up at night, I recall this feeling I had in 2014 in Sloviansk, Donbas, eastern Ukraine. At that moment, I was taken as a hostage by Russian-led separatists. I was beaten up, threatened to be executed and put into the basement where I spent two weeks, and then moved to the occupied police detention center, where I was until the liberation of the town by the Ukrainian army, two and a half months later. First week in the basement I used to sleep while sitting on the bench, then they allowed me to lay down on the clothes on the floor, and there was a better sleep. But every time I would’ve woken up I had that feeling that it was not over. The nightmare in my dream continued in reality.

And that was the feeling I had when I woke up after a brief sleep on the train in the middle of the night. 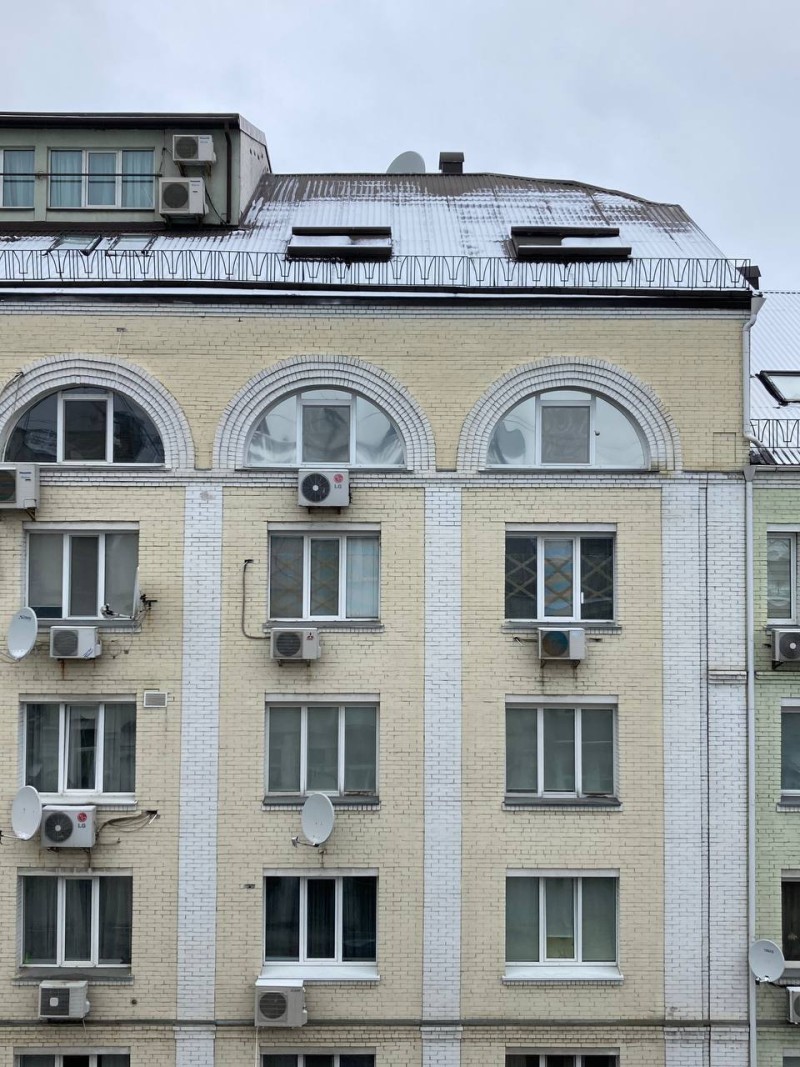 There is a group of IT company employees staying at the house of my girlfriend’s colleague fiancée. Two couples and two families. One family has two daughters and a dog. It is in the countryside, a little village where everyone knows each other. When we go out for a walk during the day, and just looking at the households behind the fences, an old man runs out and starts asking us who we are and what we are doing in the street. The fiancee tells his last name and the number of the building we stay at. The old man quiets down, apologizes and explains his treatment with a threat of the invasion. We joke around that a bit.

The household we stay at has supplies in potatoes, flour, homemade wine, and other foods, there are chickens. We have simple, but delicious countryside dinners. The kitchen becomes a newsroom with everyone checking the phones and sharing good and bad news, jokes, and whatever comes to mind. Many people have never met before, so it’s also a communication among us on who is who, and who likes what. My girlfriend’s colleague is also on the phone looking for the options to find accommodation for the fleeing people who continue to come into the area from Kyiv and eastern Ukraine.

At some moment there are only young women in the room and we talk about the parents who stayed in the attacked towns. The girls share that almost all of the mothers have some food supplies and reserves. And we have this horrible insight how generation after generation people in Ukraine are expecting war to happen, and try to secure some basic needs with supplies. Guys and I go to the store to buy food and some domestic stuff, and the conversation falls into the same direction. 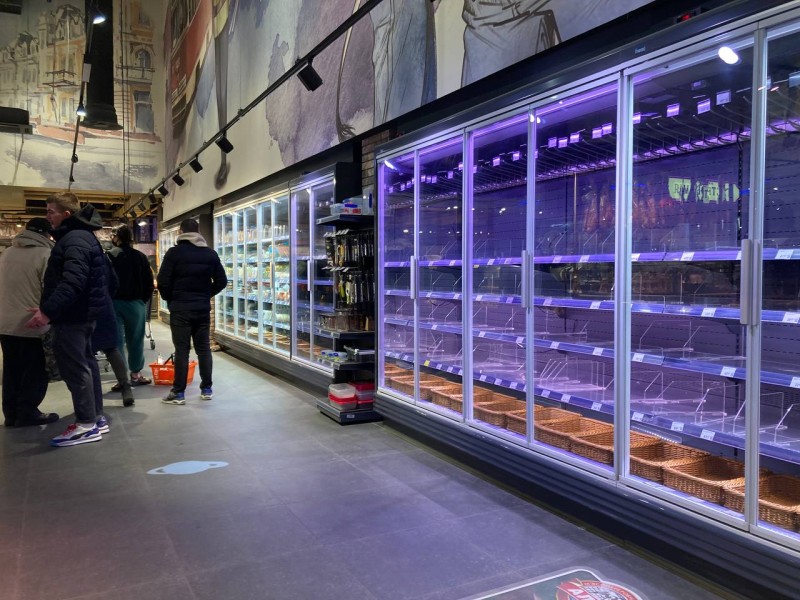 On Sunday I get on the train and immediately start thinking why the hell I am doing that. I have vague agreements with some of the reservist armed territorial defense people and an even vaguer idea to assist foreign journalists covering the events. I am afraid, and I have these numerous thoughts revolving in my head. I talk to the two mobilized men on the train, they are simple folks from the relatively small town. One of them is dissatisfied that he has to pay for the ticket, while men run away from Kyiv for free. He also complains that the war is fought by the poor. But he’s also carrying bottles with water and food to support others and himself where he goes. He’s convinced that everything is gonna be cool. As the train approaches Kyiv my fear diminishes.

It is sunny. The platform is filled with people and the departing trains are packed. But the mood is calmer than on the videos from before. When I approach the subway at the railway station the siren goes on. The subway movement is limited and I ride one stop, and then walk.

There are very few cars, and expensive ones too. The streets are almost empty. As I walk I am afraid of the Russian saboteur groups and that someone will shoot me down. Gradually this fear decreases. I see the queues near the shops. Only grocery stores are open. They have opened for the first time in the last day and a half. And it gives me this feeling of familiarity. Something that I knew a long time ago, and somehow forgot. And I recall the Soviet era. I was 11 when it fell apart. But I remember how common it was to stand in line for half an hour to buy some bread. How often people used to spend their lives in lines, the most, probably time used, after sleep and work. The lack of common goods and resources. When the USSR was at war with the whole world. The Soviet culture of state exploiting the people is flickering in the air. 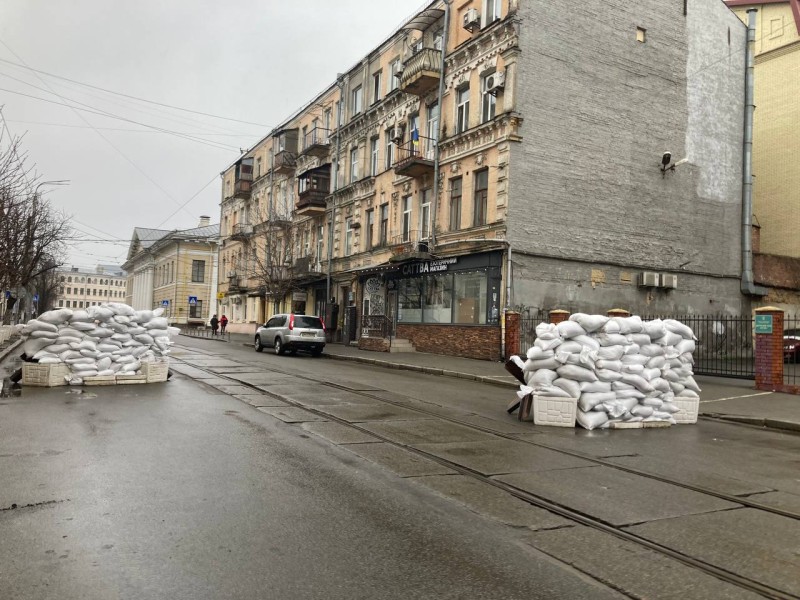 Pawlo Yurov is a theatre director and playwright/screenwriter, coming originally from Luhansk region. He works with topics of forced migration, armed conflict in Eastern Ukraine, portraying stories of people affected by it. Recently he has presented a theatre piece with the stories of miners from his hometown Antrazyt (Luhansk region).